A perfect way to start the day is to visit Biloxi’s most famous attraction, “Beavouir.” Before, I had no idea what that place was and why it was so special. Deelow told us that this was the home of the only Confederate President Jefferson Davis. Prior to that, the only Confederate person that sticks to my mind was Robert E. Lee. Thankfully, I got the chance to know about this person, whose life barely mention in the pages of history but once played an important part during the Civil War. 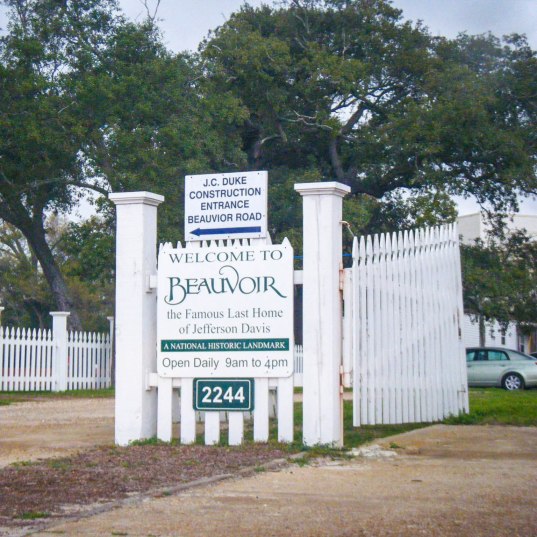 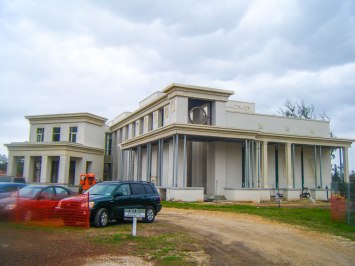 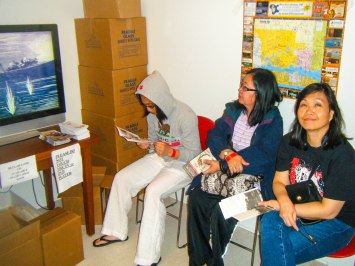 A typical winter day in Mississippi and it was a bit cloudy and windy with the waves crushing to the shores of Biloxi. We drove to our first destination of the day which was the Beavouir. Opened at 9am we went in and we parked in front of a trailer. The entire land was under construction and I was happy that after the 2008 Hurricane Katrina which razed the city to ground, the house was faithfully restored to its original structure. The trailer was a temporary Visitor Center while its future house, the Presidential Library was under construction. It was a small building; right where we went in was the cashier and gift shop.

We paid $10.00 considering Military person and $12.50 per adult if not. There was a guided tour available and while we wait, we were ushered to small room with a small tv. We have watched it and learn something about Jefferson Davis. Here was a brief history about the man found in the History website.

“Jefferson Davis (1808-1889) was a Mexican War hero, U.S. senator from Mississippi, U.S. secretary of war and president of the Confederate States of America for the duration of the American Civil War (1861-1865). Prior to the start of the war, Davis had argued against secession, but when Mississippi seceded he resigned from the U.S. Senate. In February 1861 he was elected president of the Confederacy.

Davis faced difficulties throughout the war as he struggled to manage the Southern war effort, maintain control the Confederate economy and keep a new nation united. Davis’ often contentious personality led to conflicts with other politicians as well as his own military officers. In May 1865, several weeks after the Confederate surrender, Davis was captured, imprisoned and charged with treason, but never tried.”

After watching the brief documentary, we joined a couple of people who came in and who were also waiting for the tour. An elderly woman greeted us and led us out the back of the trailer to the grounds of Beavouir. A bronze statue of Davis greeted us with a historical marker commemorating its significance in US history. We followed the path with the signs of “Tour” and passed by one of the guest houses. A small cottage on the middle of the yard was very cute.  The current site was around 52 acres but during Davis lifetime it was 608 acres. Beauvoir means “beautiful view.” 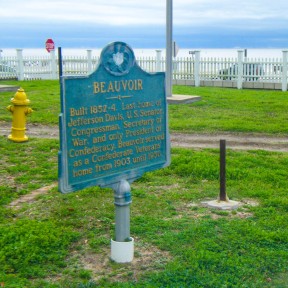 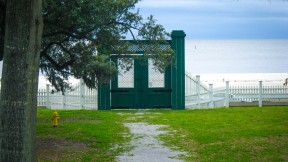 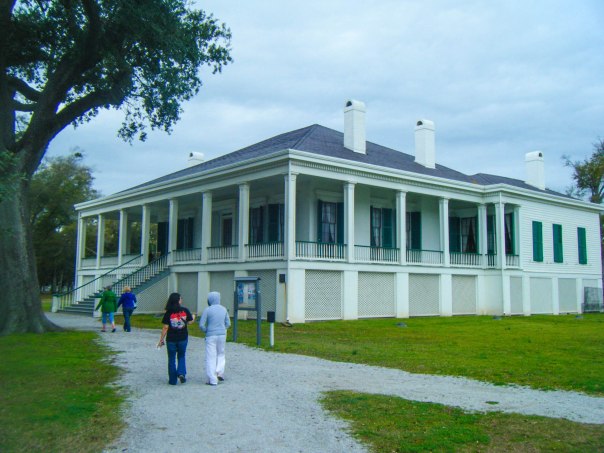 It wasn’t that far before we reached the Louisiana cottage-style plantation house, surrounded by cedars, oaks and magnolia trees. We climbed the main steps to the entrance of the house. We took some photos by the veranda. The tour guide told us to gather around her. Standing by the main door and wearing the clothing of those days, she introduced herself and give a description of who Jefferson Davis was.

“Raised on the Mississippi frontier, Davis’s life was shaped by his brother Joseph, who was twenty-four years his senior. Joseph Davis made a fortune as a lawyer and planter, and he played a paternal role in Jefferson’s life for many years. After Jefferson graduated from West Point and served in the army, Joseph gave him a plantation and the slaves to farm it. In the 1840s, Joseph managed the plantation so that Jefferson could go into politics.

Jefferson Davis became a staunch states’ rights Democrat and champion of the unrestricted expansion of slavery into the territories. He was elected to the U.S. Congress in 1845 and then was appointed to the Senate after he became a hero while serving in the army during the Mexican War. In the Senate he opposed the Compromise of 1850. In 1851 he resigned from the Senate to run unsuccessfully for the Mississippi governorship. In 1853, President Franklin Pierce appointed Davis secretary of war. Davis served ably in this office and in 1857 reentered the Senate, where he continued to advocate the spread of slavery into the territories. During the secession crisis, he resigned from the Senate and in 1861 was chosen by acclamation to be the Confederate president.”

Davis worked very hard at his presidential duties, concentrating on military strategy but neglecting domestic politics, which hurt him in the long run. He could not manage congressional opposition as successfully as Lincoln, nor could he inspire the southern public as Lincoln did his public in the North. Davis was also a poor judge of people. The Confederate president protected incompetents, such as Braxton Bragg, and he did not make use of talented men he disliked, such as Joseph E. Johnston. In April 1865 the Union armies finally surrounded Richmond, and Davis and his family fled the city for the Deep South, only to be captured in Georgia in May. 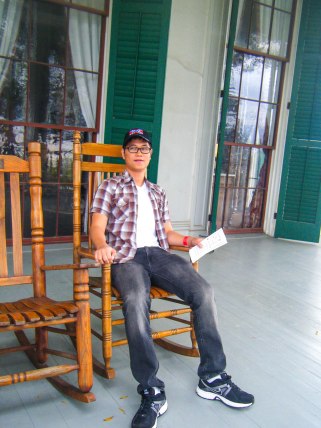 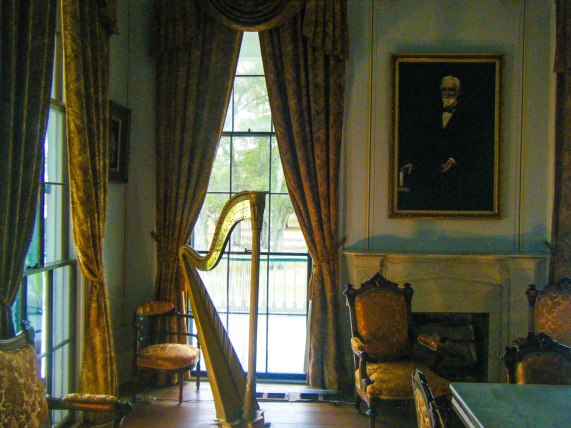 Davis’s life after the war was bleak. Charged with treason, he went to prison in Fort Monroe, Virginia, where he remained for two years. In prison his physical and emotional health deteriorated, and he was never the same after he was released in May 1867. He and his family traveled abroad for two years. When he returned to America, he had trouble making a living. He worked for an insurance company in Memphis, but the company went bankrupt, and when he published a history of the Confederacy while living in Beavouir in Mississippi, it did not sell well.

The publication of The Rise and Fall of the Confederate Government led Davis to begin a wide-ranging tour of the South. Congress in 1876 had passed a universal amnesty bill restoring citizenship to former Confederates. It included but one exception: Jefferson Davis. The exclusion of Davis from the bill outraged Southerners. Many Mississippians, in fact, wanted the former president to represent them in the U.S. Senate and urged him to apply for a pardon so he could do so.

Jefferson Davis, however, would have none of it. In a speech to both houses of the state legislature in 1881, he stated his position clearly, “It has been said that I should apply to the United States for a pardon, but repentance must precede the right of pardon, and I have not repented.”

In 1889, after completing A Short History of the Confederate States of America, Jefferson  Davis left Beauvoir for Brierfield Plantation near Vicksburg. The weather was abnormally cold and the former president fell ill on the journey. Soon prostrated by fever and sickness, he returned by steamboat to New Orleans. He died there of acute bronchitis complicated by malaria on December 6, 1889. 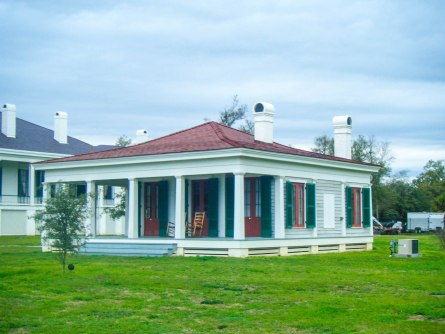 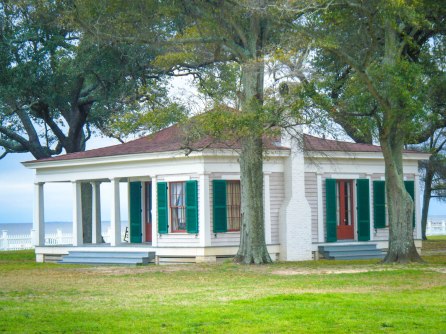 Jefferson Davis died a citizen of no country but a Confederacy that no longer existed. It was not until October 17, 1978, that another Southerner, President Jimmy Carter, signed into law a unanimous resolution of Congress restoring to citizenship the last Confederate.”

A short but concise history of the colorful yet sad life of Jefferson Davis was witnessed by our group. The tour guide facilitated the trip then we proceed and let us in through the main door. We went in immediately to the living room. On the first room on the right was the room of Varina Anne Davis, known as “Winnie” where there was a painting of her and her bed. Winnie was a famous belle of the South. Consider the muse of the confederacy especially in the social gatherings in New Orleans. The furniture were vintage and there were toys around.

Then on our left was Jefferson Davis’ study area. Where his books were arranged and a portrait of him was the main focus of the room, the place where he receives his visitors and entertains them. It goes all the way to the next room where the family sits and to enjoy the evening with readings or listening in the piano. As we walk, the tour guide gave as the history of the house.

Started in 1848, the same year as the nearby Biloxi Lighthouse, Beauvoir was completed  in 1852. Originally the summer home of the James Brown family, the house was then called “Orange Grove” after the Satsuma Oranges then grown there.

The Brown family lived in Madison County, Mississippi, but “Orange Grove” offered them a summer escape from the heat and humidity of the interior. They did not have long to enjoy the home’s beautiful view of Mississippi Sound, however, as the outbreak of the Civil War temporarily ended Biloxi’s popularity as a resort community.

James Brown died in 1866 and though she kept the property for a time, Mrs. Brown finally was forced to sell the home at auction in 1873. It was bought by a speculator named Frank Johnson who sold it three months later to Sarah Dorsey. She renamed it Beauvoir, which in French means “beautiful view.”

In 1877, President Jefferson Davis visited Biloxi in search of a quiet place where he could live peacefully and write. While there he called on a family friend, Mrs. Sarah Dorsey. Learning of his plans, she offered him the use of a cottage-like pavilion on the grounds. Davis agreed on the condition that she accept a monthly rent of $50.

Beauvoir was appropriately named. The property offered stunning views of the blue waters of Mississippi Sound and the Gulf of Mexico. It was the perfect writing retreat for the former leader of the Confederacy and he fell in love with the estate. In 1879 he offered to purchase it from Mrs. Dorsey. 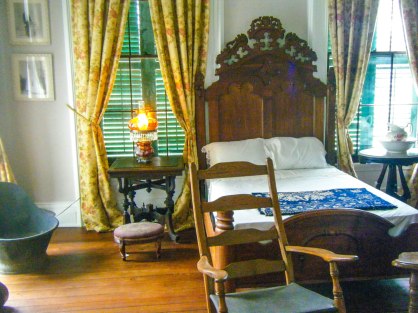 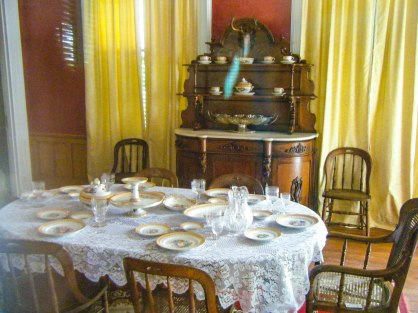 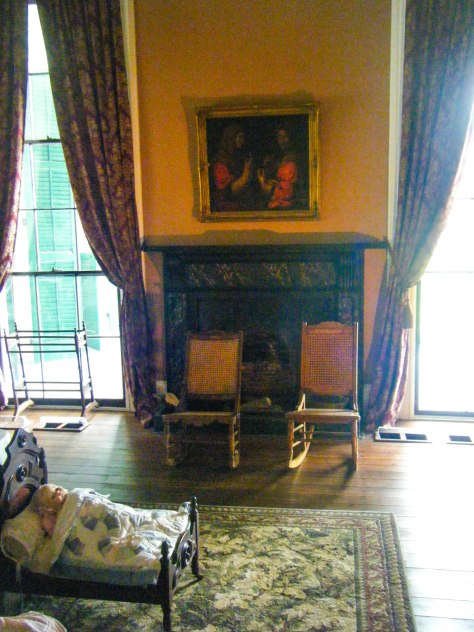 An agreement was reached for Davis to buy the home for $5,500 to be paid in three installments. He made the first payment but when Mrs. Dorsey died six months later, he learned that she had no other heir and that Beauvoir belonged to him. President Davis
would live there for the rest of his life.

With President Davis’ death, Beauvoir passed to his daughter, Winnie, who also became a writer. When she died in 1898, the home passed to her mother. Mrs. Davis, however, moved to New York two years later. In 1903, Beauvoir was sold to the Mississippi Division, Sons of Confederate Veterans for the then token sum of $10,000. A home for elderly Confederate soldiers was founded on the grounds, while the house itself became a shrine to President Davis.”

After that, we went to the back porch where there were two wings. On our right was the dining area which serve as the informal and formal. It was a simple dining with no extravagant in it unlike on other southern homes. On the left side was the bedroom of Jefferson and his wife Varina. Like the dining room we can only gaze at it through the glass of the doors. The tour ended there as we walk down the stairs and explore the surroundings. 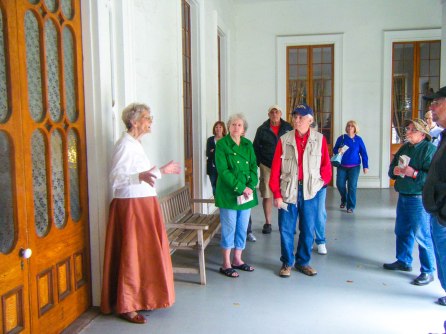 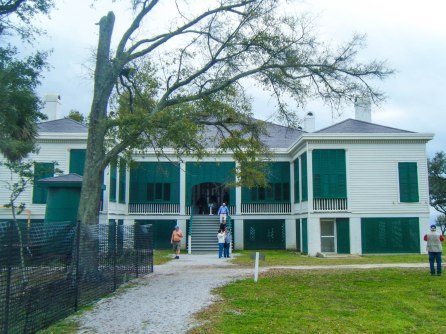 Back of the house

Most of the areas were still close due to the construction of the Presidential Library, so we walked towards the two cottages located on each side of the main house. After that we walked back to the visitor center. Where I took some pictures and bought ourselves some souvenirs and what I got was the Confederate mug. 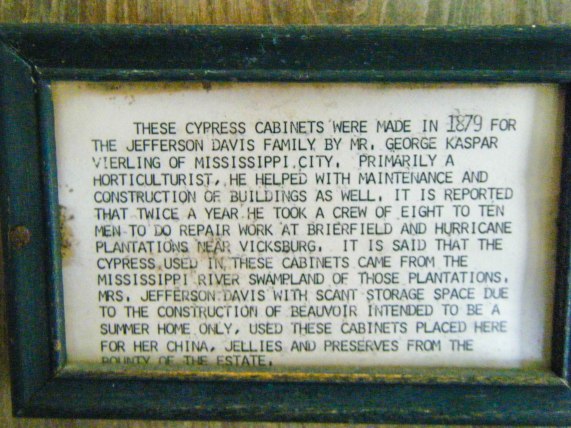 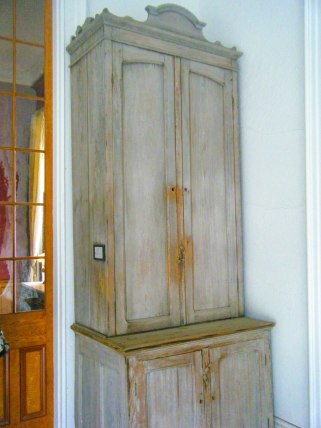 We left the house with more knowledge of the Confederate President Jefferson Davis and his life. Though he is not as famous as his Northern counterpart or the Southern General he played an important part in the United States history whether it was goo or bad. With those thoughts we then headed to our next destination at the Biloxi Visitor Center.

Here are the links for more information: